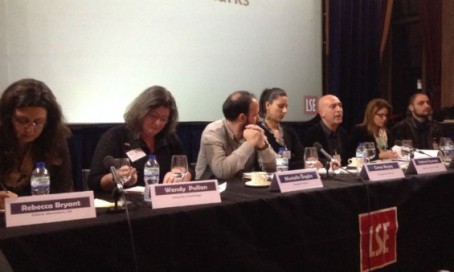 A number of associations and civil society organisations have been pushing for the return of Famagusta to its rightful owners, its citizens, in a sustained campaign conducted on multiple levels. Some of the main actors of this campaign gathered in London for a conference organised by the London School of Economics’ Hellenic Observatory and the Contemporary Turkish Studies department and shared ideas, proposals, suggestions and plans for a revived city.

As Dr Rebecca Bryant of the Hellenic Observatory, the coordinator of the conference, suggested, the aim of the conference was to ask “what if” with regard to the future of a once thriving city.

The panels covered thoroughly the subject of how an essentially new city could or should be built. A recurring theme throughout the day conference was whether the new, modern Famagusta should be built from scratch or whether and to which degree it should incorporate existing structures. In terms of planning, specific proposals came from the likes of economist and businessman George Lordos, member of both the Bicommunal Famagusta Initiative and the equally ambitious Famagusta Ecocity Project and Glafcos Constantinides, renowned sociologist, economist and urban planner.

Mr Lordos spoke of modern and zero energy buildings, a new road and transport network and the beach as the focal point of the area, with a pedestrian walkway from Agios Memnonas in the south to Salamina in the north. He also suggested the walled city should be attributed world heritage status by UNESCO so to attract investments.

Mr Constantinides presented a plan for the city with sectors of the economy spatially laid out on the map, with tourism, education, services, cultural heritage and agriculture/manufacturing sectors occupying different parts of Famagusta. He also proposed the establishment of a development company that will coordinate the whole project.

There were also suggestions about the economic structure of the city, with the economist Symeon Matsis among others highlighting the significance and potential of tourism. Mr Matsis noted that from 1960 to 1973 Famagusta came to prominence and recorded impressive growth due to the attraction of its 6km sandy beach, now fenced off.

But it was the discussion about the sociologic aspect of the revitalisation of the city that revealed the common passion of the two communities to reclaim their home town.

Dr Ceren Bogac, one of the people behind the Famagusta Ecocity Project, moved the audience with her eloquent and passionate plea for a new city that will integrate the memories and “realities” of all Famagustians, may they be Greek Cypriot refugees, Turkish Cypriots born and raised there, such as herself, or migrants.

The Turkish Cypriot architect and environmental psychologist described how she felt growing up in a house facing a ‘ghost-town’, inhabited “not by ghosts, but by souls.” She stressed that the revival of the city requires “empathy” between the two communities.

Nektarios Christodoulou, a University of Cyprus PhD Grant Holder made the case for a strong civil society that will push things forward, Dr Gabriel Koureas, lecturer in Modern and Contemporary Visual Culture at the School of Arts, Birkbeck, University of London touched on how a new city can create a renewed common identity for its inhabitants, while by Dr Christalla Yakinthou from the University of Birmingham Department of Political Science and International Studies raised questions about how the “empathy” between communities can be achieved and who is included in the dialogue.