The shadow was growing… the energy was coming out from the crashes… There were car crashes…airplane crashes…city crashes! The blood and steel were unifying as they have never came together in this way before. The new city, which is brutal, was separating itself from the ground. The city was singing:

Who can tell what I am?

Look at me… I am the blood that you breathe… 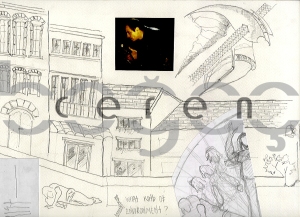 I am proposing an alive city, that will grove with every piece – which  won’t break  the unity. When it achieves to a social and spatial bond, this city will grow from its own seed. This is a from of inside to outside growth! It has begun to develop from the life energy coming out with Crashes! This is the third day of crashes! Stone, earth and blood are becoming a united whole,in a way thay we have never seen before!

The new city was searching for those who were injured. Who had nowhere to go… who had experienced the CRASH!While taking the crowd inside, the city has started to flow in the air. It was getting more power when it was taking more people inside… It was searching, teleporting those… those who do not belong to your glittering cities anymore!

Life has never been without a movement.

How can a place be without ?

How can cities be without ?

Can’t you see? Your high- culture is broken into pieces! Sub- cultures can not find life any more in the places that they were coming out,were excluded and insulted. The shopping mols, streets fabrics of the social structure which this people can not be a part of it, alienation to them! For whom did they build all these places and now to whom do they serve to? Debris quarters of these homeless, poor, immigrant people, are seperating from your glittering cities!

I wish, we could stay without pain at the wound of a knife

I wish, we could play games without stages, without lies

I wish, it would be only the waves that destroys our castles made of sand

I wish, I could be the pilot of my planes which were made of papers

I wish I could scream and someone would hear me!